This is why all jobs should be advertised as flexible

Flexible working for family reasons should be celebrated.
via shutterstock.com

Heejung Chung, University of Kent
All large companies in the UK have been rushing to report their gender pay gap by an April 5 deadline, when new rules came into force to tackle the stubborn gap between the salaries of men and women.
Motherhood is a key reason why this gender pay gap persists. Many women leave the labour market or move into part-time jobs after giving birth, which has a knock-on effect on their pay. This is partly due to conservative views regarding the division of labour in the UK, where most mothers take on the bulk of childcare and housework. Even when mothers choose to maintain their careers after childbirth, there can be an inherent bias towards them due to societal perceptions that they will prioritise their family over their work.
The best way to solve this problem is to ensure that fathers, or partners, are made to take on as much of a role in childcare as mothers. One way to do this is to give them the opportunity to spend time with their new-born babies, as well as to provide them with the opportunity to be more hands on later in the child’s life.
Yet it has been three years since shared parental leave was introduced in the UK to tackle this very issue – and the government admits that take-up may be as low as 2% of those eligible. It’s not really working.

Cognisant of this, in a recent report, MPs on the Women and Equalities Committee suggested that in order to tackle the gender pay gap, workplaces should allow fathers to spend more time with their children. It proposed a number of ways to do this including two weeks of paid paternity leave as a right for all from day one on the job – rather than the current period of at least 26 weeks by the 15th week before the baby is due. It also suggested that fathers receive 12 weeks of “use it or lose it” leave. This goes beyond the statutory shared parental leave scheme, under which partners can only take leave if mothers do not take their full maternity entitlement.
The committee also recommended that all jobs be advertised as flexible from day one unless there are business reasons not to. This right to work flexibly is crucial: without it, the other policies will not have a long lasting impact.
Flexible working patterns allow parents to balance work with family life. They allow parents to do tag-team parenting – where one starts work earlier and picks up children after school, while the other drops the children off at school and works later. Teleworking allows parents to shave off commuting times which can be used for childcare purposes. The option to work part-time is also valuable for parents.
Flexible working is already prevalent in the UK. About a third of employees have some access to flexible schedules, and a quarter have worked in a public space or at home on occasion. However, for many people, especially for men, flexible working is not used to meet family demands but to meet work demands or to increase efficiency – such as catching up on work at home. One reason is a fear that using flexibility for family reasons could have repercussions on their career.

Making all jobs flexible would help remove the stigma flexible working may carry and allow workers to use it to shape their jobs around their family demands. Those in low-skilled, low-paid jobs will benefit most, given how limited access to good flexible arrangements is for these workers.
Removing the stigma around flexibility can also remove some of the unconscious biases that work against mothers. Because women still do, and are expected to be responsible for childcare, mothers have no choice but to fit work around family demands through flexible working.


This is one reason why women, especially those of child-rearing age, are discriminated against at work: some employers consider whether a woman may have children in the future and therefore if they will incur extra costs to the company during maternity leave. 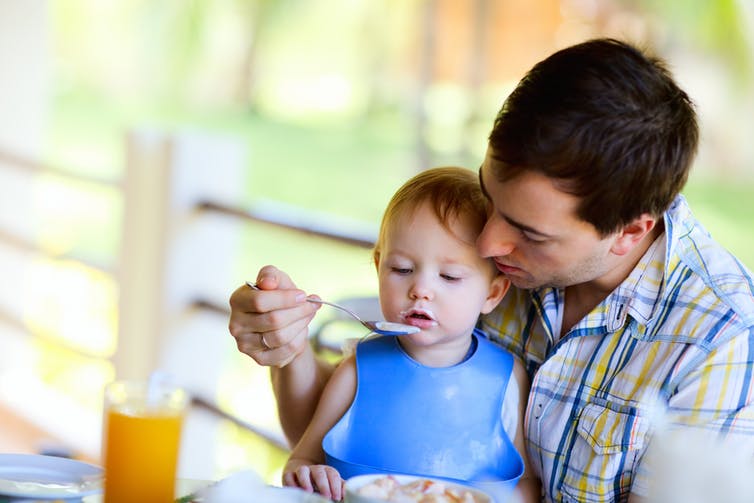 But if both men and women were equally likely to reduce their work intensity, work flexibly and take leave after having children, this could change employers’ perceptions around hiring and promoting people. When men are expected to have similar working patterns to women in the years after having a child, the implicit assumptions of motherhood and what that means for work will disappear. So too, hopefully, would the penalties associated with it.
This can also help change work cultures where work is not defined by hours spent at work but the contributions made, and where a better balance between work and family life is prioritised not only for the performance outcomes it can result in, but also for the shared social goals it meets, such as gender equality.
Increasingly, fathers want to work flexibly, and many believe work-life balance is more important than higher income. The demands are there, it is time for employers to meet them.
Heejung Chung, Reader in Sociology and Social Policy, University of Kent
This article was originally published on The Conversation. Read the original article.